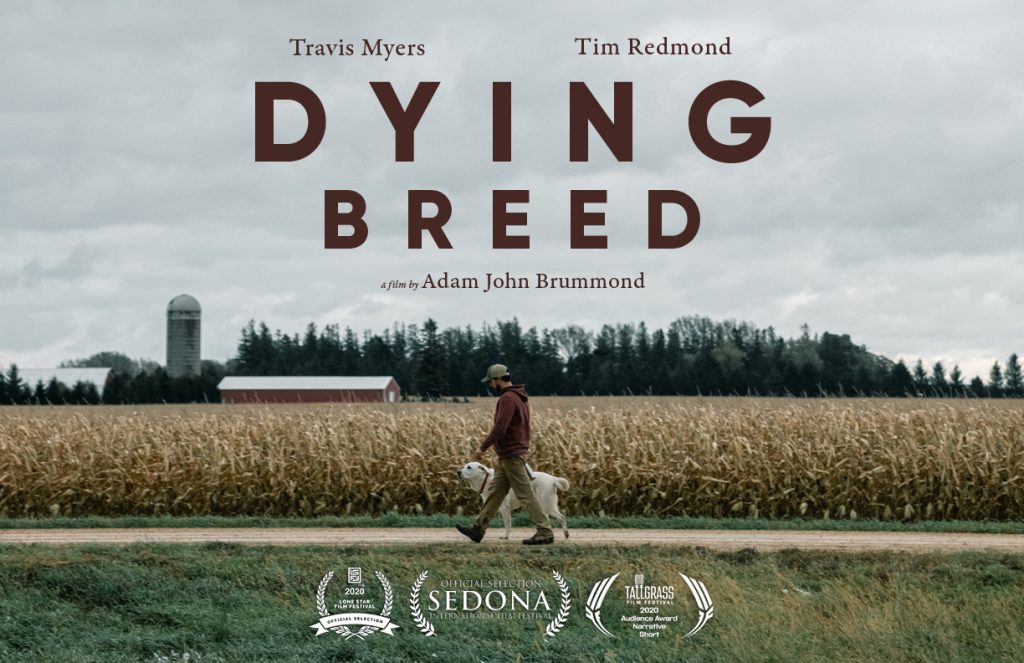 The 20-minute film starring Travis Myers and Tim Redmond tells the story of Jesse, a third-generation American farmer who struggles to find a way out after the impact of the trade war, climate change, and a pending bankruptcy leaves him with no choice but to sell his family’s farm. Through his eyes, ‘Dying Breed’ invites a poignant immersion into the daily toils of the modern farmer and the impossible choices that come when life and legacy are on the line.

“I find that there is an immense gap in the understanding most Americans have of the modern farmer,” said Director Adam John Brummond. “We’re obviously long past the days of horse-drawn plows and manual field labor, but lesser-known dynamics make it a significantly more arduous vocation than commonly known. To have a chance at survival, today’s farmer has to be a student of agronomy, the economy, and marketing. And most notably, regardless of formal education or personal efforts, they are at the mercy of not only their local weather but the political and macroeconomic climate as well. Now magnified by the Coronavirus pandemic, these feelings of isolation and hopelessness are acutely affecting farmers and becoming ubiquitous in understanding for people all over the world.”

In fact, ‘Dying Breed’ is a cry for help on behalf of families and friends of the global agricultural community ravaged by a silent suicide epidemic. Proud and humble farmers privately suffer in small towns and rural areas devoid of professional counseling and mental health support while fighting a losing battle against an unfavorable economic environment threatening their inherited legacy, and the future of their families. After spending his childhood on a family farm in southern Minnesota, Brummond has a unique perspective on the world the film invites you to experience.

“The pressures of an ever-changing world are becoming too much for more and more of these proud men and women to bear. Family farms that once flourished, are sinking. These individuals feed the world – yet sadly they are progressively taking their lives at an alarming rate,” said Brummond. “My hope is that viewing this film will translate on a large scale into global awareness and action on this issue, but if every viewer simply picks up the phone to call a farmer they know to talk, listen, and let them know they are not alone – a difference will be made.”

An elegant exploration of the destruction of the traditional family farm, the purpose of the short film is to shout a story that is quietly repeating itself on farms across the globe. The Factory aims to spread cogent awareness of this issue in the hope that with greater recognition, greater support will help inject hope into this increasingly devastated global community.

If you or someone you know may be contemplating suicide, call the National Suicide Prevention Lifeline at 1-800-273-8255 or text HOME to 741741 to reach the Crisis Text Line. In emergencies, call 911, or seek care from a local hospital or mental health provider.

With a reputation for telling globally important local human stories, The Factory is a commercial & film production company founded by entrepreneurs Adam Brummond, Mark Nevils, and Peeter Rebane with offices in Los Angeles, London, and Tallinn.

The Factory just completed its second feature film, Firebird, directed by Peeter Rebane, filmed on location in Estonia, Malta, and Russia. Their first feature, A Thousand Junkies, was an Official Selection of the 2017 Tribeca Film Festival. Currently, three additional features are in development with plans for more.